On Friday, April 1st, the Greater Arlington Chamber of Commerce held the 2022 State of the County Address at the Sheraton Hotel. Going into this event, attendees knew it would be a special one since this was Judge Whitley’s final State of the County in Arlington. Judge Whitley did not disappoint. He spoke of Unity in politics and coming together as a community as well as the things he has learned throughout his years as County Commissioner and later, Judge.

The Address began with a welcome from the Greater Arlington Chamber’s CEO & President, Michael Jacobson. This welcome led us into a Presentation of Colours from the amazing Honor Guard at the Tarrant County Sheriff’s Office. 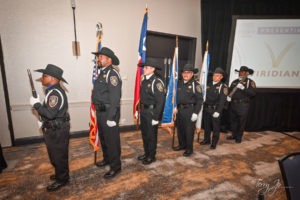 As the Presentation of Colours were led out of the room by Deputy Jeffrey Lang, Kiara Mullins, a Senior at Martin High School, stepped on stage to sing the National Anthem. Her voice radiated throughout the ballroom. After the National Anthem, Chaplain McDuffie from the Tarrant County Sheriff’s Office gave an inspiring invocation that spoke only of love for our community. 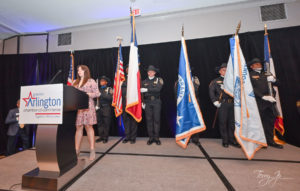 Robert Kembel, President of the Nehemiah Company, then took to the stage to say a few words as they were the presenting sponsor for the event. Kembel took most of his time on the stage to thank Judge Whitley on everything he has done for the county and how he has helped the business community. The time finally came to introduce the Keynote Speaker for the Address and David Tesmer, the Chief Community and Public Policy Officer of Texas Health Resources, had the honor of introducing his long time friend, Judge Glen Whitley. Tesmer spoke about his friendship and all of the amazing opportunities Judge Whitley has helped bring to Tarrant County.

Finally, the time had come to hear what Judge Glen Whitley had to say to attendees. This was one of his final events to share with us what he accomplished over his 26 years of service to Tarrant County and what he hopes for the future of the county. He started off by thanking a few people including the Tarrant County Commissioners, staff, Arlington fire Chief, AISD Superintendent, Mayor Jim Ross, Veterans, and his wife, Brenda. 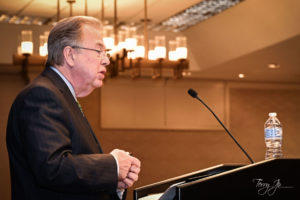 Before speaking on his time as judge, Whitley spared some time to speak on the Groundbreaking of the National Medal of Honor Museum. He spoke so highly of the event and even said it was the most moving ceremony he had ever seen.

He also mentioned the campaign of “Not in my County”, which is a campaign to end intimate partner violence. Sadly, the Judge had to report that there was a rise in intimate partner violence homicides within Tarrant County during the 2021 COVID restrictions. We assume that this will be a campaign that Whitley will continue to support even after he is no longer a judge as he spoke about how passionate he is for the cause.

“26 years ago, I was sworn in as a Commissioner by County Judge Tom Vandergriff,” began Judge Whitley as he took us on his journey to becoming the Judge we know today. He told us the five lessons he had learned being in county leadership.

Judge Whitley really honed in on voting. He wanted to make sure that people understand that their voice matters not only in the national elections but local elections are where you, as a resident, can choose who represents you and your voice within local government. He also mentions that the tax rate for Tarrant County has decreased by 13.5% since 1997 (the year he began as Commissioner for Tarrant County). This is the lowest combined tax rate of the six large urban counties in Texas. Tarrant County remains financially healthy.

We might be an urban county but we continue to grow in population. Over the last decade, we have grown 16.7% and are now considered the 3rd largest county in Texas (14th in the U.S.). Judge Whitley informed us that Tarrant County even has a larger population than the entire state of Nebraska.

Whitley was not shy to say that although we are an urban county we have some of the best healthcare and mental health facilities around. Tarrant County holds the only Level 1 Trauma Center, JPS. This facility also is one of the best for mental health care.

3. Collaboration is the key to regional success

“It’s a whole lot easier to work together and collaborate.” – Judge Glen Whitley

This statement could not be truer. We all know that without collaboration nothing can get done. Nothing can be executed until all elected officials or staff members within a business are on the same page. The county is no different. All pieces of the puzzle must be working together to succeed in doing what is best for the county and for the residence in the community.

Whitley mentioned all of the great things that they have been able to accomplish while he has been serving Tarrant County. The county was able to help with economic development through a few big projects like Southlake Town Center, Globe Life Field, AT&T Stadium, Dickies Arena, Facebook Data Center and most recently, the National Medal of Honor Museum.

He also mentioned his impact on transportation within the county. “If we want people to keep moving here, we need to keep them moving once they get here,” said Judge Whitley. To go along with that statement he talked about some of the main transportation roads he helped get built. Those include, I-30 and 360 Interchange, North Tarrant Expressway, 161 (George Bush), 121 (Sam Rayburn), and Chisholm Trail Parkway.

4. COVID-19 has tested us and we are coming back stronger

Tarrant County recently assessed the impacts that COVID-19 had on residents, local businesses and community-based organizations. Over 4,500 residents took the assessment and shared their opinions on where they would like the county to focus their efforts. As far as the businesses and organizations, they assessed how they pivoted during the Pandemic and the biggest challenges they are currently facing.

It was great to hear that the county is continuously assessing not only the residents and their needs, but what could be done to help the business community flourish after a rough two years.

Judge Whitley then outlined the plan that will help make Tarrant County stronger. There are four broad areas in which funding will be allocated, (1) prepare for the future, (2) Improve public health & wellness, (3) Revitalize the economy, and (4) Strengthen the community. Progress is already being made with the recently opened Mental Health Jail Diversion Center.

5. Informed and engaged citizens make all the difference

Lastly, Judge Whitley wanted to touch on the need for nonpartisanship. Quoting the words of President George Washington in his Farewell Address, “Partisanship agitates the community with ill-founded jealousies and false alarms, kindles the animosity of one part against another, foments occasionally riot and insurrections…” The Judge called for Tarrant County to come together and for the citizens to be informed and engaged with their local government.

As Judge Glen Whitley’s Address came to a close, he had only a few things left to say. When speaking about Tarrant County, he said, “It is a tremendous community because we care, and we don’t let people tear it apart.” At last, Whitley stared out at the attendees for a final time and emotionally said, “This is the first time I am saying this out loud. This is my last State of the County.” 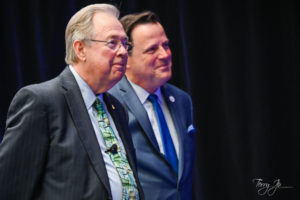