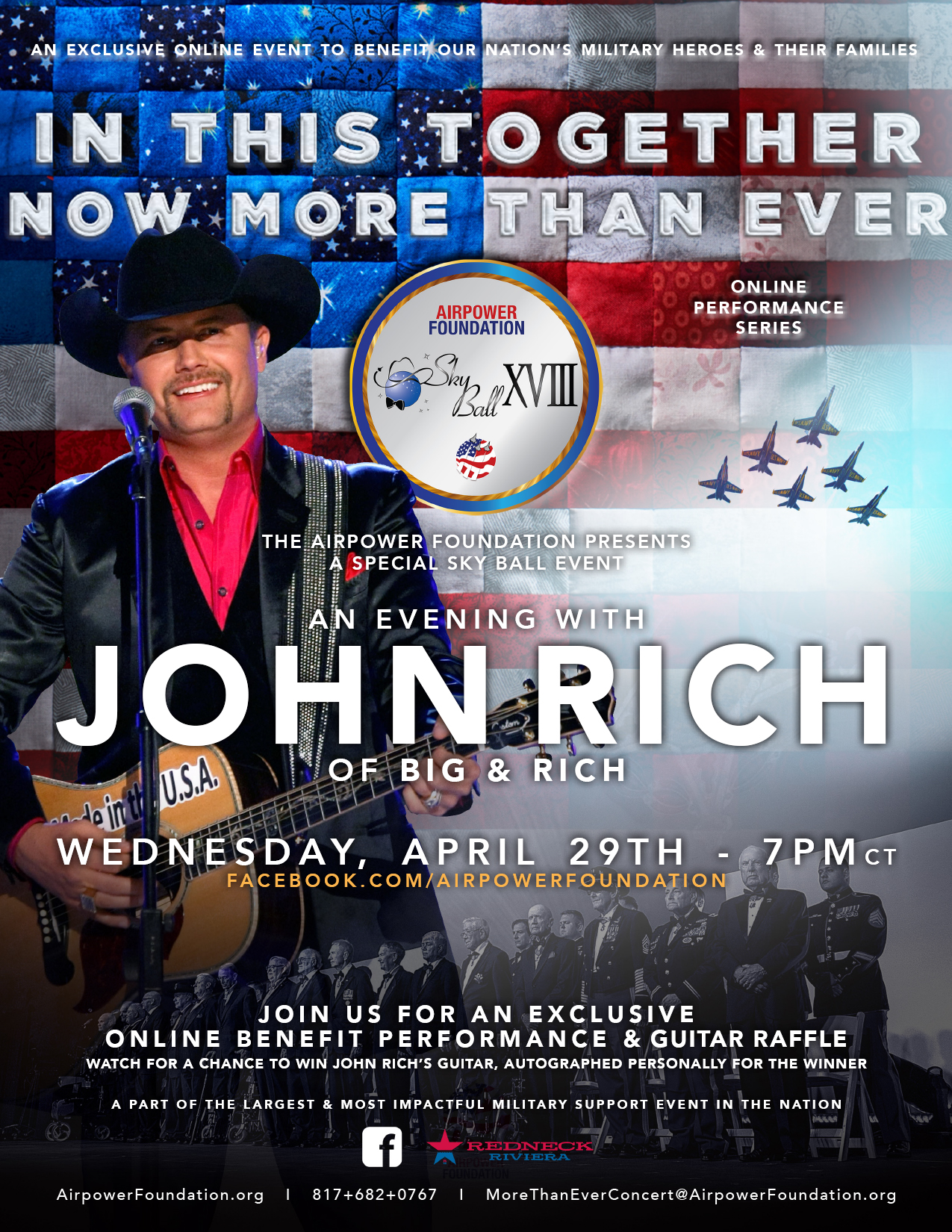 Arlington is the American Dream City where people dream big and have the resources to succeed. Members of greater Arlington have the freedom to pursue their dreams because of the U.S. Military. Our military heroes bravely make sacrifices to keep our community and country safe. The Chamber is proud to share that the Airpower Foundation is encouraging people to rally behind the military and show our support during this unprecedented time.

The Airpower Foundation is hosting an exclusive online Sky Ball event series to benefit our nation’s military heroes and their families: In This Together – Now More Than Ever. Donations to the Airpower Foundation event will be used to assist our nation’s military, veterans and their families during this time of need. The inaugural event will feature John Rich of Big & Rich who is performing Wednesday, April 29 at 7:00 pm Central. As a special treat, John Rich is raffling off his guitar, autographed personally for the winner. CLICK HERE to view the scheduled live concert on the Airpower Foundation’s Facebook Page.

For the first time since its inception, the Sky Ball is to be hosted in Arlington at the new Globe Life Field. “The Airpower Foundation has displayed an unwavering commitment when it comes to supporting our military veterans across this great country,” said Arlington Mayor Jeff Williams. “The foundation’s legacy of recognizing their sacrifices, and taking care of military families, is an inspiration to all Americans. We’re incredibly honored to welcome the prestigious Sky Ball to Arlington, the home of the future National Medal of Honor Museum, and we’re grateful for the instrumental leadership of Airpower Chairman Sid Eppes for helping us showcase why The American Dream City has a patriotic spirit that’s second to none.”

“We couldn’t be more excited with this opportunity to host our 18th annual event at the brand-new ballpark with the Texas Rangers,” said Sid Eppes, Chairman of the Airpower Foundation. “This extraordinary new venue will allow us to raise more funds than ever before, making an even larger impact for the lives of our nation’s military, veterans, wounded, their families, and the families of our fallen military heroes.”

Although this impactful event at the newest venue in Arlington has been delayed, we can continue to support the Airpower Foundation’s mission through this online concert.  We are proud to see the Airpower Foundation continuing to support our nation’s heroes during this time where many are facing are hardships. Make sure to show your support to our military by tuning in to the John Rich of Big & Rich concert this Wednesday.