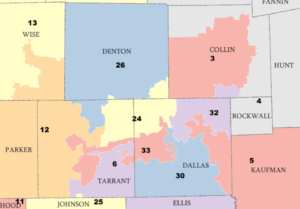 Republican Senator Brian Birdwell is a decorated Army veteran who almost lost his life in the 9/11 attack on the Pentagon.  Senator Birdwell and his wife Mel live in Granbury.  He represents 9 essentially rural counties south of the Metroplex and a small portion of Southeast Arlington.

Chairman Birdwell chairs the influential Senate Natural Resources and Economic Development Committee.  This is important to Arlington and the state business community because Senate bills impacting economic development are usually assigned to this committee.  In his role as Chairman, Senator Birdwell can determine which bills get committee hearings and ultimately have a chance to be voted on by the full Senate.  In the last session, Chairman Birdwell managed the legislative process that ultimately got Chapter 312 reauthorized.  (Chapter 312 gives cities, counties and special taxing units the ability to abate a portion of property taxes for a limited period to encourage economic development investments.  Arlington used Chapter 312 to incentivize General Motors to expand its Arlington location rather than move.)

Senator Birdwell is also a member of the Senate Finance Committee which develops the Senate version of the state budget.  It is here where key decisions are made about which economic development and transportation issues get funded.  Arlington is fortunate to have such an influential State Senator representing part of our city.

Democratic Senator Beverly Powell is a real estate developer and an avid supporter of education in North Texas.  She and her husband Charlie, a well-known Republican Party Activist in North Texas, live in Burleson.  Her district 10 is completely within Tarrant County and she represents a large part of Arlington.  Senator Powell was elected to the State Senate in 2018 and was widely praised as one of the rookie stars in the 86th Texas Legislature.

Senator Powell served on the school board in Burleson for xx years and most recently was the Chairman of the Board of Regents for Texas Wesleyan University in Fort Worth.

An aggressive advocate for education and business causes among others, Senator Powell introduced 80 bills in her first session, 10 of which were signed into law by the Governor.  She has already pre-filed 16 bills for the 87th Legislature which begins next week. One of those bills is to reauthorize Chapter 313 of the State Tax Code which gives school districts the opportunity to participate in economic development incentives.  This important economic development tool must be reauthorized this session or it will “sunset” in 2022.

Senator Powell is a member of the Senate Natural Resources and Economic Development Committee where she has proven to be a reliable vote for economic development issues.

Republican Senator Kelly Hancock represents the balance of Arlington in the State Senate.  His district 9 includes parts of Tarrant and Dallas Counties.  He and his wife Robin live in North Richland Hills.  Senator Hancock owns and manages a chemical distribution business based in north Texas.

Senator Hancock is amazingly influential in the State Senate as Chair of the Business and Commerce Committee, Vice Chair of the Transportation Committee, a member of the Finance Committee and the Natural Resources and Economic Development Committee.  These committee assignments give him a voice in almost every issue that impacts the business community agenda outside of education and workforce.

In the 86th Legislative session, he authored or co-authored 73 bills, 33 of which became law.  This does not count the number of his bills that were adopted into other legislation or were passed as the House companion bill.

Before being elected to the Senate in 2012, he served 6 years in the Texas House of Representatives.

Senator Hancock is a reliable supporter of economic development in Arlington and of UTA.  The UTA government affairs department says they think of Senator Hancock as their “go-to” Senator.  When Arlington needed legislation to make the new 800 room hotel and convention center possible, Senator Hancock worked behind the scenes to make it happen.   When the need is in his district, Senator Hancock comes through.