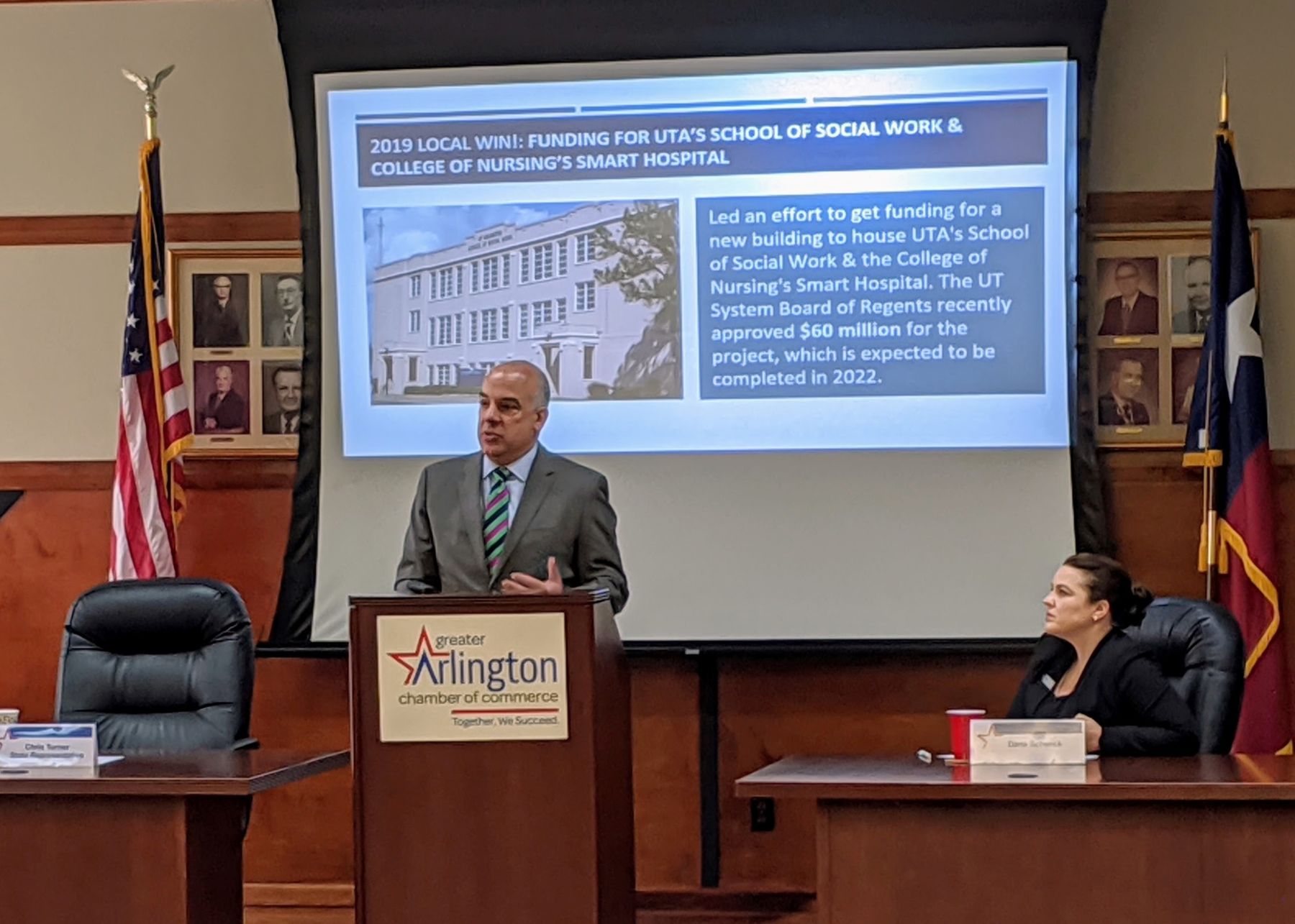 If Texas businesses want to see Medicaid in Texas expanded to provide coverage for about one million working adults who have no coverage, they need to make the business case to the legislature. Obviously, the healthcare case has not been persuasive. Thirty-seven states have expanded Medicaid under both the Trump and the Obama administrations. Texas’ choice not to expand leaves millions of dollars sent to Washington by Texans, in Washington, or worse, being sent to other states. This sentiment was expressed by Chairman Chris Turner in response to a question about Medicaid expansion from a member of the Chamber Public Policy Advisory Council.

Chairman Turner, who represents Southeast Arlington in the Texas House of Representatives, spoke to a packed room of Greater Arlington Chamber members Friday morning, January 7th. He was especially proud of some things he was able to accomplish the last session that directly benefits District 101 in Arlington. He was a co-sponsor of HB4347 which changed the rules for hotel tax and cleared the way for the recently announced 880 room Arlington convention center and hotel. The UTA School of Social Work is in a 100-year-old building that was originally Arlington High School. He was able to lobby the UT system and helped secure $60 million in funding for a new school of social work after the session. He has worked with TxDot to make pedestrian-friendly changes to Pioneer Parkway between Collins and Hwy 360 which hopefully will eliminate the pedestrian fatalities which have occurred in that stretch in recent years. He also secured a $750,000 grant for the East Arlington Library which will be used to bring technology to people in East Arlington who don’t currently have access to wi-fi and computers. 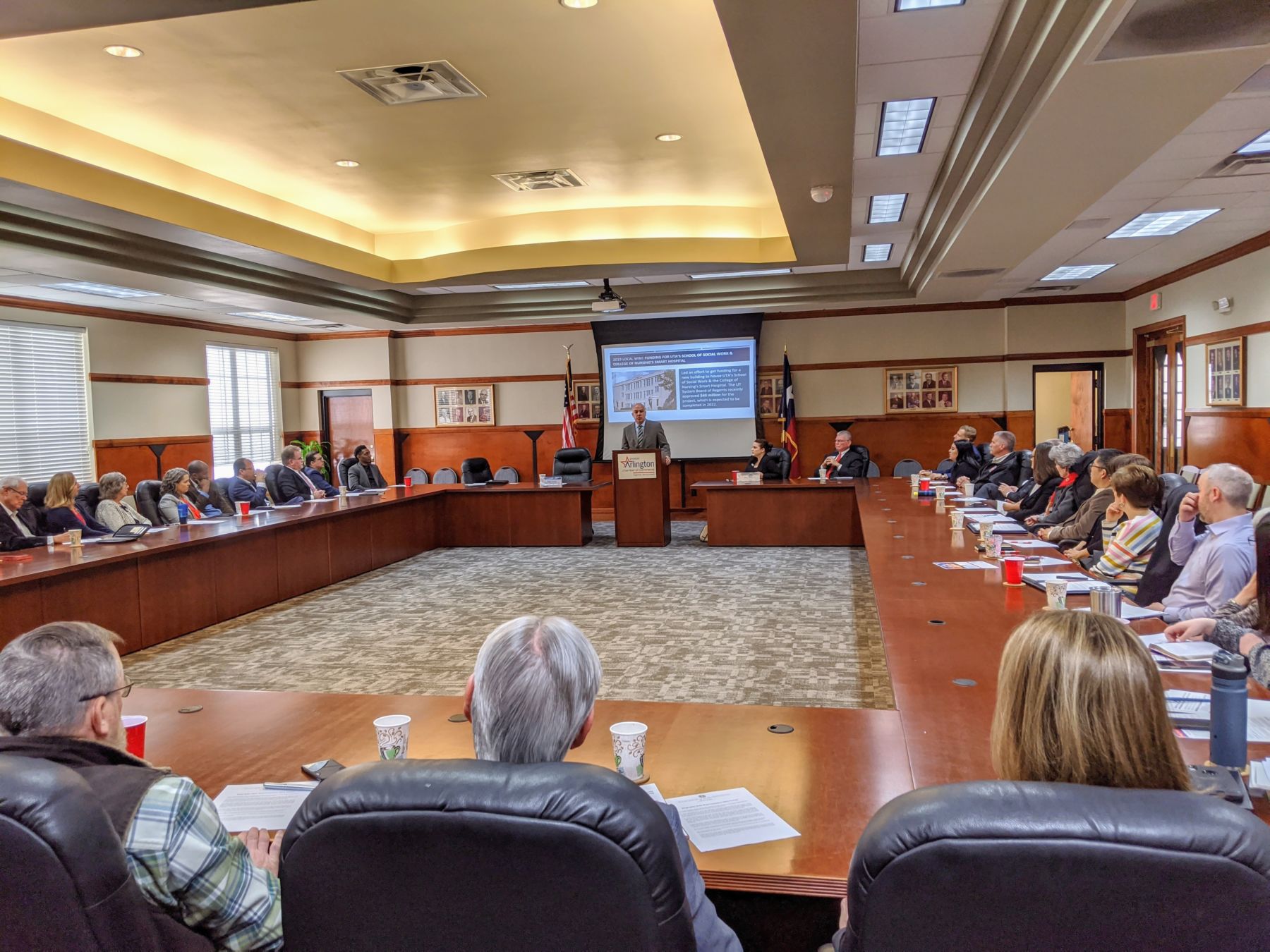 Chairman Turner saw the 86th Texas Legislative session as the most productive and balanced in years. He attributed the productivity to a closer balance between the number of Republicans and Democrats in both chambers of the legislature. Recognizing HB3 as the largest advance in education funding in a long time, he also mentioned advances in school safety, mental health and retired teacher benefits.

Not everything in the session was perfect. From Chris Turner’s perspective, the legislature made minimal progress on healthcare, criminal justice reform and gun safety. He is concerned about the source of funds to continue the increase in education funding for HB3 beyond the current biennium. One idea being talked about is to take one penny of the two cents that cities can levy as sales tax and send it to the state instead. In the last session, the idea of increasing sales tax overall by one cent died a quick death. He does not believe either idea is workable.

Chairman Turner is Vice-Chair of the House Redistricting Committee and has been involved in redistricting public hearings around the state. A total of 28 are planned before the session opens in January. He spent some time explaining the population growth of the state, the demographic shifts that are occurring and the need for a complete census count.

He expressed support for a bill in the next legislature to address the serious backlog of construction projects needed to update our state colleges and medical schools in Texas. He authored HB2000 in the last session which would have addressed this problem with tuition revenue bonds. The bill passed the House but died in committee in the Senate.