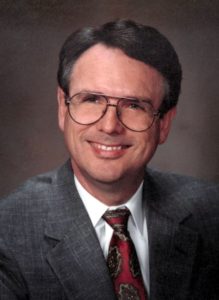 Carl Harris, Chairman of the Arlington Chamber of Commerce Board of Directors 1990 – 91, passed away on June 2. Carl Leigh Harris was the husband of Ann Harris and father of Amy Leigh Tremante and Courtney Harris. Carl was born in Wichita Falls, Texas to Leigh Mack Harris and Mary Jane Harris. He graduated from Baylor University with his B.A. in Journalism and received his Masters of Science in Journalism from Northwestern University in Chicago. He began his career as a journalist with the Dallas Morning News and later became the Director of Public Relations for Bell Helicopter where he worked for over 38 years. Carl was an avid reader and loved the arts, enjoying the Dallas Symphony and Kimbell Art Museum. He was called to help others, serving on the board of the Arlington Women’s Shelter, volunteering for the Arlington Life Shelter and teaching at the Arlington Reads program of the Public Library. He will be remembered for his bright eyes, joyful smile and energetic spirit. Carl is survived by his wife, Ann Harris, daughters, Amy Leigh Tremante and Courtney Harris, and three grandsons. In lieu of flowers, the family is requesting a donation to The Arlington Life Shelter.