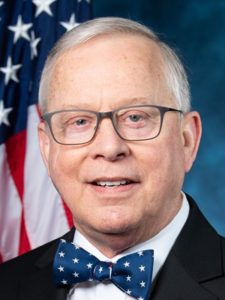 The Greater Arlington Chamber of Commerce takes a moment of silence today to remember Congressman Ron Wright who passed away yesterday, February 7. As a sixth-generation resident of Tarrant County, Congressman Wright was an active member of our community and an unwavering advocate of the greater Arlington region.

“Arlington lost a genuinely remarkable man last night who was one of our most impactful and passionate community and political leaders over the last 30 years,” said Michael Jacobson, President and CEO of the Greater Arlington Chamber of Commerce. “He was a person with absolute integrity who worked tirelessly, even while battling for his life, for the City, State and Country he loved.”

Congressman Wright has served Arlington and Tarrant County for over 30 years. Mr. Wright served at-large on the Arlington City Council from 2000 to 2008, including the last four years as Mayor Pro Tempore. Additionally, he was the founding president of the Arlington Tomorrow Foundation Board of Directors.

The creation of the Arlington Tomorrow Foundation, the city’s largest philanthropic organization, was among Mr. Wright’s proudest accomplishments during his time on the City Council. Since its creation in 2007, the foundation has awarded more than $25 million in grants to local charities and City Departments who work each day to make Arlington vibrant and strong through educational and recreational opportunities, arts and culture, and social services.

“I’m saddened at losing a great friend and a great champion for Arlington and Tarrant County,” said Arlington Mayor Jeff Williams, adding that Mr. Wright was the driving force behind the creation of the Arlington Tomorrow Foundation. “Ron was always professional, a man of integrity in everything he did and a voice of reason. He worked hard to find solutions for everyone. And even if people disagreed with him, they respected him.”

Mr. Wright served as District Director for Congressman Joe Barton from 2000 to 2009 and was the congressman’s Chief of Staff from January 2009 to May 2011. Wright left Washington to accept the appointment by Commissioners Court to replace Betsy Price as the Tax Assessor-Collector of Tarrant County. He was elected to a full term by the voters of Tarrant County in November 2012, and re-elected to a four-year term in November 2016. Wright was elected to serve U.S. House District 6 in November of 2018 and re-elected in 2020.

“With the passing of Congressman Ron Wright, many of us lost more than a representative and public servant; we lost a friend,” said Bill Lynch, Vice President of Public Policy for the Greater Arlington Chamber, “I met Ron years earlier, but really started to know him when he worked for Congressman Joe Barton. Whether you agreed or differed with him on the political issues of the moment, he made time for anyone that wanted to talk and always listened. You could feel how much he cared for our Country and the people he represented. He never once was too busy to come to our Chamber, talk with our members and give us his support, always with a smile.”

Our Chamber and our community will greatly miss Congressman Wright, and we are forever grateful for all he did to serve our community.

Mr. Wright is survived by his wife, Susan, and their children and grandchildren.