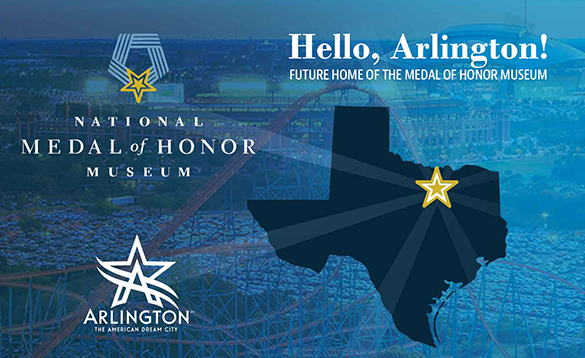 Last Wednesday, the National Medal of Honor Museum Foundation Board of Directors selected Arlington, Texas to be the future of America’s newest national treasure. After a year-long search, they determined Arlington was the perfect location to celebrate the stories and sacrifices of the 3,500+ Medal of Honor recipients. “All of us at the Museum were simply overwhelmed with the enthusiasm, warmth and level of commitment of those involved who have worked beyond expectation to have the Museum come to Texas,” said Joe Daniels, the foundation’s President & CEO. “Seventy recipients of the Congressional Medal of Honor have lived in the region, and nearly 1.8 million veterans and active-duty military currently call Texas home.” The Museum will be built in Arlington’s growing entertainment district.

One of the core missions of the Museum is educational outreach, which will include the construction of a large education center. North Texas boasts a population of 7.4 million, with 1.8 million under the age of 18. The educational opportunities are boundless. There are more than 27 million people that live within a four-hour drive of Arlington as well as 110 million airline seats between DFW International Airport and Dallas Love Field.

“We are humbled by the choice of Joe and his board to trust Arlington, North Texas and the State of Texas with this venture, and we are honored to celebrate these true American patriots,” said Greater Arlington Chamber of Commerce President & CEO Michael Jacobson, “It’s important to remind each and every American that we are the land of the free because of the brave, and Arlington provides the exposure nationally and globally to do so.”

The Chamber was grateful to play a role in this project. Thank you to our elected official and city leaders at City Hall as well as the Arlington Convention & Visitors Bureau for all their hard work to bring this national gem to Arlington.

CLICK HERE to read the official press release announcing the selection of Arlington from the National Medal of Honor Museum. You can watch a recap of Friday’s press conference below.