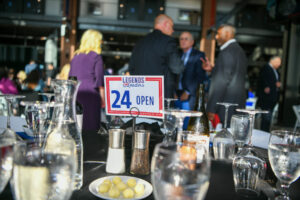 Last Thursday, the Chamber had the opportunity to speak to a returning Arlington leader and an out-of-this-world legend.

Every year in collaboration with the Texas Rangers, we host an exclusive event called Legends & Leaders. This is an event where we highlight Arlington’s community leaders and our amazing trailblazers that have become legends. This year we got to celebrate and learn more about UTA’s new President, Dr. Jennifer Cowley and NASA Astronaut, Chris Cassidy.

Dr. Cowley started off the night. This was a great opportunity for her to allow the community in on who she is as a leader and her connection with Arlington. By now, most people have heard that Dr. Cowley has come back to her roots as she is an AISD grad. She never thought she would be back in Arlington, especially as UTA’s first female President.

“My plan was to become City Manager or something in public service,” said Dr. Cowley. She has a true need to impact local communities. Throughout her career in higher education, Cowley has shown that community building is always her top priority. UTA will truly benefit from her want to connect the university with not only Downtown Arlington but the entire city,

“I am a direct communicator. I like to think I am a thoughtful and resourceful leader. It is all about looking towards the future, “Dr. Cowley replied when asked about her leadership style. It’s important that we have someone leading UTA that is all about looking five to twenty years in the future. It’s how a university should be ran. It shows that a leader wants to set the University up for success even after they are gone.

After getting to know Dr. Cowley a little better, Trey Yelverton, Arlington City Manager, decided to throw some fun questions her way through a game of one-word association.

Through this game, we found out that Dr. Cowley’s favorite board game is Scrabble and that her first job was at Six Flags Over Texas as a “Guess Your Weight” girl. Something that might be more intriguing than being a teen guessing visitors weight at an amusement park, is the type of pet Cowley has. One might assume, she looks like a dog person, because who isn’t? You will be surprised to know that Dr. Cowley’s pet of choice is a Chinchilla named Chinchi. Her Chinchilla is no ordinary Chinchilla though, Chinchi is a world-class parkour Chinchilla. We might just have to make Chinchi our next Legend.

Now let’s not get too far into next year’s planning process before speaking on our current legend. 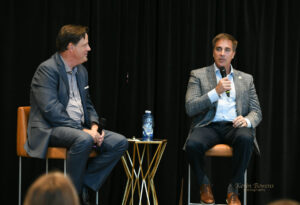 Arlington, Texas, the American Dream City, may not seem like the landing place for a NASA Astronaut and U.S. Navy SEAL but Chris Cassidy has settled in just fine. We had the opportunity to speak with him about his time before becoming President and CEO of The National Medal of Honor Museum, which broke ground this year in Arlington.

Not all of us can become legends, but those who do have quite the story to tell. Chris Cassidy shared his story with the Chamber and attendees at Globe Life Field. It was an eye-opening interview that made everyone in the audience realize that even if your career path changes as you get older, it could be the best decision of your life.

“I loved sports and knew I would never make it as a basketball player, so naturally, I wanted to become a basketball referee, “said Chris Cassidy. Although he has not fulfilled that dream yet, you could potentially catch him on the court refereeing to his hearts content at a future Mavs game.

The referee dream may not have panned out, but after being an active member of ROTC in high school, Cassidy joined the Navy at 17 and began his career in the military.

Although the Navy was supposed to be a way to afford a higher education, Cassidy found a passion in becoming the best at his job. Eventually becoming a Navy SEAL and a Naval Captain. Cassidy thrived in the Navy but was always looking for ways to advance his career. This led him to getting a master’s degree in Ocean Engineering and becoming a NASA Astronaut. Chris Cassidy said, “I met Bill Shepherd, the first Navy SEAL to become a NASA Astronaut, and thought why can’t I do that?”

Cassidy loved being in the Navy but there was something about the teamwork and work ethic that went into training for an expedition that caught his interest. When asked if Navy SEAL training prepared him for NASA, Cassidy said, “SEAL training is very physical and mental. You can’t do it alone; you are truly in it together. While NASA training is created on a system of once you are selected, the system wants you to succeed.”

With resources in place, Cassidy was able to thrive and was lucky enough to spacewalk ten times throughout his three expeditions. He is the first person to ever take a space selfie and has spent 55+ hours in space. His series ‘Among the Stars’ which is streaming on Disney+ shares his time of trying to navigate space during a Global Pandemic.

Cassidy had a few comments about the entire production process for the series. “I became the cameraman and director of the show when the world shut down,” said Cassidy and although he felt at times the production crew could be intrusive, he loved that ‘Among the Stars’ highlighted the team sport of space.

The final topics of the night gave attendees a raw take on what it is truly like to be an astronaut. Launching and living in space is the easier part of the mission. As reentry into earth’s atmosphere and crash landing is the riskier side of the mission. Cassidy shared his experience of the month-long recovery process after returning from space, but if he were to take another trip, he would love to take two rookie crew members with him to show them the stars.